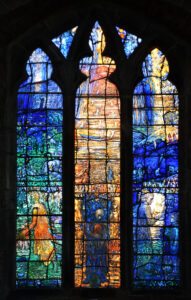 Stained glass is often referred to as the poor man’s Bible as it was used from the Early Middle Ages to illustrate scriptural stories and the lives of the saints to largely uneducated congregations. Interestingly, at least sixty-five fragments of glass, including some painted medieval pieces, were found during the excavations in Ardfert Cathedral in the 1990s.   In more recent times, stained glass is viewed as a spectacular art form to enlighten, inspire, console and instruct those who look upon them.

St. John’s Church is famous for its stained glass which, with the new Reconciliation Window by Tom Denny, will extend over three centuries.  The Great Sanctuary Window by Michael O’Connor, completed in 1861, dominates the interior. There are seven principal lights or panels in the lower section which contain the figures of Christ the King, St. John the Baptist and the Twelve Apostles in order of their selection by Jesus in St. Matthew’s Gospel (10.2-4). The upper traceried portion has representations of The Annunciation, Nine Choirs of Angels, the Holy Spirit and various other emblematic forms.

Other windows, by artists so far unknown, dating from this or an earlier period, are The Assumption of Mary and Ascension of Jesus over the Sacred Heart Altar, and panels of St. Patrick and St. Brigid.

The majority of the windows along the aisles and transepts were installed over the period 1880-1910 by Earley & Powell and later John Earley & Co. based in Camden Street in Dublin. The firm was one of the largest and most prestigious ecclesiastical decorators both in Ireland and Great Britain.  They provided a high standard of ecclesiastical art during the Gothic Revival of the 1800s and particularly from the second half of the nineteenth century when the building of Catholic churches flourished. These include St. John the Baptist preaching in the Wilderness (1882), Christ the Good Shepherd (1882), St. Henry and St. Claire (1891), St. John the Evangelist (1893), Adoration of the Magi (1898), Suffer Little Children Come unto Me (1898), The Resurrection (1907) and The Crowned Virgin (1910).

Of particular note is the Life of St. Brendan window, on the western aisle, executed by Earley’s in 1902, in memory of Michael Mac Sheehy, Chief Inspector of National Schools in Ireland.  Like the new Reconciliation Window, this depicts some scenes with a distinctly local connection – Ardfert Cathedral, St. Ita and St. Erc.

St. John’s contains two stained glass windows commissioned by Dean Reidy in the mid-1950s:  The Lady Clothed with the Sun by Richard King over Our Lady’s altar and the modernist Four Evangelists and Trinity windows by Patrick Pollen in the Baptistery.

The new Reconciliation Window is the first stained glass window to be installed in St. John’s in sixty years. Like the windows from the other periods, it has its own unique style and form. While the overall theme is universal the window is set in the context of Tralee’s 800 year, sometimes turbulent history with forgiveness, healing and reconciliation replacing hate, pain and division. The central panel has the Loving Father embracing the wayward son with the jealous son, and, indeed each one of us, invited to cast aside our prejudices and join in the celebrations of thanksgiving. The Father’s love is unconditional and unlimited.  It is a window for our time; a shared endeavour, a noble contribution to what our ancestors commenced and to what our descendants, in time, will, with God’s grace, continue.

Thomas Denny was born in London in 1956, and studied at the Edinburgh College of Art in the 1970s. In the 1980s and 1990s he worked principally as a painter and exhibited widely, with one man shows in London, New York and Bath. From 1985, however, he began to be increasingly interested in making work for specific architectural settings, above all stained glass windows for churches. All his life he has loved exploring buildings and landscapes, especially in England and Ireland and Scotland.

Speaking of his material, Tom says that: ‘Stained glass is an extraordinary, volatile medium, constantly changing with the light, and often profoundly affecting the space in which it is installed. Humility, and sensitivity to the setting are essential for the stained glass artist; a window is a serious responsibility, becoming part of the spiritual life of the church where it may dwell for centuries. It should be beautiful, meaningful and offer potential for contemplation and discovery.’

In a distinguished career as a stained glass artist he has, so far, executed about sixty windows, mostly in English Parish Churches, and for the Anglican Cathedrals of Gloucester, Hereford, Durham and Leicester.  The themes explored in these windows are scriptural. At Durham, for example, different expressions of the idea of Transfiguration are embedded in what seems initially to be an abstract expanse of gold. Landscape (itself a sacred subject matter) is an important element in his glass, helping to connect a window to its wider setting. How exciting, he feels, in the new window to be installed in St. John’s Church, Tralee to be able to place stories of reconciliation and healing in the astonishing Slieve Mish Mountains and shorelines of Tralee Bay, and, as a preliminary, to walk day after day in these places.

Tom is son of the late Sir Anthony Denny, 8th Baronet of Tralee Castle, and his wife, Catherine Beverley.   The Denny family were landowners in Tralee from the end of the sixteenth century to the beginning of the twentieth who played their part in some of the most turbulent episodes in Tralee’s history. The modern town of Tralee, as it developed in the eighteenth and nineteenth centuries, owes much to the influence of the Denny family, not least the town’s main thoroughfare of Denny Street, laid out in the 1820s, and the magnificent Town Park, formerly the Denny Demesne, which continues to be enjoyed by the current generation of townspeople and visitors.

Tom Denny is also descended from the Fitzgerald’s, Earls of Desmond, who founded Tralee about 1216. A number of his family members served as rectors of St. John’s Church of Ireland, Ashe Street, Tralee, as well as other local parishes, and it is fitting that the new Reconciliation window is, in many respects, the fruit of a joint endeavour by both Christian faith communities in Tralee.

On the eve of the blessing and unveiling of the new Window of Reconciliation in St. John’s Church, Tom speaks affectionately about Tralee:  ‘After a century of absence it is inspiring, and strangely moving, to think of generation after generation becoming deeply familiar with this place and interwoven with it in all kinds of ways. The Denny’s loved Tralee; it was their home.’

Tom is married to Benita Kevill-Davies. They have two grown up children, Madeline and Ezekiel, and live and work on a small holding in the Blackmore Vale, deep in Dorset.

The Artist’s Reflections on the Window of Reconciliation

The new Window of Reconciliation has three panels, or ‘lights’; the central themes are reconciliation, healing and renewal. A number of scriptural passages that explore these interlocking themes have been chosen, passages that allow for a particular ‘story’ in each of the three lights, but that also create unity in the window as a whole. The setting for the narratives of the window is the landscape of Tralee Bay. Sometimes we see wide vistas, of mountainsides and rocky outcrops, of distant field-scapes, of rain shrouded hills. Elsewhere, the intimate particularities of place are evoked: moss and lichens, pebbles on the shore, distinctive thorn trees and stumps of bleached bog oaks, even Kerry slugs. At the foot of the right hand light, small ferns have been transformed into St. Hildegard of Bingen’s ‘life green fingers of God’.  All through the window is a sense of fast moving weather, of rain and sun, dark and light, that can itself speak of the theme. Likewise, a movement of wind – birds – (the Holy Spirit abroad in Ireland?) animates the window.

In the central light is the story of the Prodigal Son (Luke 15) or more appropriately the Loving Father. The young man has arrived, perhaps, from overseas [a returning emigrant?] his boat pulled up on the shore, the bay with its mountains beyond, wild geese flying across. His father greets him as he stumbles up the beach. Below, we see father embracing son, a moment of unconditional love, forgiveness, and acceptance. Family and friends look on; it is not really clear, from the clothes of the various figures, whether we are in Biblical time, in ancient Ireland, or in the prese

The right hand light is about Jesus’ reading from the Book of Isaiah; ‘The Spirit of the Lord is upon me… He has anointed me to preach the Good News to the poor… to bind up the broken hearted. To proclaim liberty to the captives’ (Luke 4). Here, the story reads upwards.  In the centre of the window, in a dark, oppressive, rocky place, suffering figures crouch, locked in anguish. Beyond, others emerge into the light ‘beauty for ashes…the garment of praise for the spirit of heaviness; that they might be called trees of righteousness, the planting of the Lord’ (Isaiah 61).  We seem to be looking down from a mountain, perhaps onto the marshes of Derrymore Island and the north side of Tralee Bay. Seabirds fill the sky.nt

In the left hand light, Saint John the Baptist, patron of the parish, sets forth, ‘filled with the Holy Spirit’ not only to ‘bear witness to the Light’ but also to ‘reconcile father and child’, to ‘bring the disaffected to the wisdom of the just’ (Luke 1). Higher up, it is we who are given the task: ‘What I mean is that God was in Christ reconciling the world to Himself, no longer holding men’s misdeeds against them, and that he has entrusted us with the message of reconciliation’ (2 Corinthians 5:19).  We see a devastated hill, trees and men destroyed, and two accusing onlookers recalling Tralee’s troubled history. Below, the swords have been put aside and those who were once adversaries have come together: two women greet one another, reconciled.

Throughout the window may be found further details and stories. Some of these things will, perhaps, not be seen from the ground, although they contribute to the texture and surface of the glass.  In the little triangular tracery shapes at the top of the window, for example, are what seem to be colours and shapes suggestive of cloudscapes. Embedded in these, however, are two Companies of Heaven, tiny inscribed names of some dozens of inhabitants of Tralee from 1750 – 1840.